A well-functioning sewage system should be quiet and uninterrupted. When you hear toilet gurgling and other unusual noises, it is time to undertake a comprehensive investigation of your plumbing and pipes.

When a toilet gurgles, it means that negative air pressure (suction) is accumulating in the drain line, resulting in an airlock.

A well-functioning drain system allows air to flow freely through the lines, preventing negative air pressure and allowing waste to flow smoothly down and out. Gurgling indicates an abnormal buildup of suction in the line.

It happens for a variety of reasons, the most common of which are obstructions. If they are not removed on time, water will flow back (through a sink or toilet) and pour onto the floor. This article will teach you about the reasons for toilet gurgling and how to correct the problem.

What is Toilet Gurgling

I’m sure you’re wondering what a gurgling toilet is and why it happens.

Your toilet is making an unusual gurgling sound. It gurgles and makes strange, rumbling sounds as if it’s alive. This mostly happens after you flush or happens at random. There are times when you have a bubbling toilet that won’t flush.

Should you be worried? Yes, because if this problem is not addressed, it will worsen. The gurgling sound indicates that there is a blockage somewhere. This article will investigate these issues, as well as their causes, and will discuss the best ways to resolve them.

Causes of a Gurgling Toilet

There can be many causes of a gurgling toilet. Negative air pressure somewhere in the line causes those strange gurgling noises. When you hear these sounds, it means that there is a blockage somewhere in your drain pipes.

Instead of air flowing freely down the line, it pushes back, causing those weird sounds. This issue can sometimes be seen as bubbles in the toilet water. You have a problem in either case.

I have listed the main causes of toilet gurgling and also the tips on how to fix it.

The most basic issue is a clogged toilet. The gurgle is produced when the air is pushed back.

As a result, this is a good place to start. This is especially true if you don’t notice a problem elsewhere in the house. You might be able to fix it yourself.

The vertical pipe leading to your roof is known as the vent stack. It regulates the air pressure in your plumbing and also emits exhaust gas. However, it is intended to be an open channel at all times – no water flows through them.

When it’s blocked, you feel the negative pressure again. You may also notice slow drainage or a stinky, gassy sewer stench about the house. Clogs in vents are frequently caused by leaves and debris, or even the body of a small animal that became lodged in the pipe. Whatever the cause, you must remove it. And, most of the time, it’s not something you can do on your own.

First and foremost, you must ascend to the roof. Take a careful look if you’re comfortable with it. Hopefully, it’s simply a nest or clogs towards the top of the vent that you can remove.

The bad news is that if your toilet gurgling is due to a water main problem, you cannot fix it yourself. However, it is possible that it is the obligation of your municipality rather than yours.

The physics are the same here: The pipe has become clogged. Negative pressure drives air back through the channel from which it originated. This results in gurgles. Perhaps bubbles.

In this instance, you might notice some other signs about the house. Other drains, for example, may become clogged. Alternatively, you may flush and see water backing up in the shower.

The other possibility for a toilet gurgling is a clogged municipal sewer line – though, at this time, you’re undoubtedly finding other issues as well.

The difference here is that it is your town’s job to repair the problem, not yours. This is the pipe that transports wastewater away from the residence. This is where your mainline connects. So do the wires from other houses.

So, if you suspect it’s a municipal line, ask your neighbors whether they’re having similar issues. If this is the case, contact your township, borough, or water provider.

Sometimes, when installing a sewer system, contractors fail to follow all of the rules that should be followed. The most common causes of toilet gurgling when flushing is nozzles put at a low angle, an odor trap installed wrongly, or you choose small-sized pipes.

How To Fix Toilet Gurgling 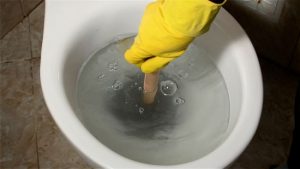 If the gurgling is caused by a clog in the drainpipe, merely plunging the toilet may be enough to release a light-to-moderate clog, such as one caused by flushing cotton-tip swabs that became trapped in the drainpipe.

Give it a good ten or fifteen plunges. This should dislodge the clog if it is close to the surface. If that doesn’t work, try a snake or auger if you have one and are handy with one. A good auger can cost up to $300, so compare that to the cost of hiring a plumber.

Bathroom fixtures (tub, sink, shower) frequently connect to the same drain line (the line that goes from the toilet), therefore cover off these drains with duct tape before plunging. If you plunge without first closing the drains, the pressure created by plunging can escape via other drain fixtures rather than dislodging a blockage.

Fit the plunger head tightly to the drain hole in the bottom of the toilet bowl when it is full of water. With 10 to 15 forceful pumping motions, try to loosen the obstruction.

A sewage snake (also known as a plumber’s snake or plumber’s auger) can frequently clear difficult obstructions in a drainpipe that plunging cannot. The snake, which has a lengthy cable and a head with cutting blades for chopping through tough clogs, can be handled by hand, crank, or motorized for ease of use.

A manual toilet auger is inserted into the toilet bowl and, as the crank is turned, the head makes its way down the drainpipe, cutting through obstructions. This sort of auger is limited by the length of its cable reach, which is typically five to fifteen feet.

A clog in a shared sewer pipe could also be causing gurgling toilets in your neighbors’ homes. If one or more of your neighbors is experiencing similar problems, contact your municipal sewer authority and report the incident. They’ll send someone out to inspect the sewer main, and if that’s the source of the problem, they’ll most likely cover all repair costs.

If you are confident that your floor is free of obstructions and other plumbing problems, you should consult with your neighbors. You can even pinpoint who is having issues. Assume you hear noises when your neighbors flush their toilets or when you drain your bathtub.

The amount of obstruction is then lower than the previous access to the sewer. If the noise emerges much later after someone has used the bathroom, the clogging is on top, above the outlet of the pipe.

This investigation can be carried out either before or after snaking the drain. Checking and clearing the vent stack necessitates getting on the roof, so if you’re not fully comfortable with that, call in the professionals.

If the aforementioned troubleshooting procedures do not stop the toilet gurgling and bubbling, it is necessary to call a plumber. Plumbers use specialized equipment, such as small cameras that can be dropped into vent stacks for a close-up look at clogs and strong sewage augers that can cut right through tree roots that could jam your main sewer line.

There’s also a risk that the main sewer line in your yard has burst or collapsed, necessitating excavation and professional repairs.

Toilet gurgling indicates an abnormal buildup of suction in the line. The negative air pressure will eventually dissipate, causing air to flow backward through the drainpipe and into the toilet bowl. When this happens, you will hear a gurgling sound, the water in the toilet bowl may bubble, and the toilet may flush itself.

Few people realize that sewer ventilation pipes are critical to the proper operation of the entire system. They not only remove odors by expelling air, but they also draw in air to equalize the pressure in the pipes.

A plunger and a sewer snake are tools that almost everyone can use. However, if such simple tools fail, you should contact a plumber. Not only does such an expert have the necessary abilities and instruments (such as a compact camera), but he or she also has access to the main sewer drain and vents. They will be able to locate the cause of a gurgling toilet and resolve the issue.